Fashion is inspiration.
Make everything your own style.

That branded clothing that I wanted to wear someday
Coordinate the whole body with that item that I thought "I wonder if it suits me"!RAGTAG With the full support of the staffThis is a serialization project for students to try at the store.
This time, as a special edition, we will deliver "Kansai edition" from the Umeda store!

These two people tried this time!

Mr. Nakagawa, who is studying fashion production, is also a big fashion lover. He seems to be shopping mainly for used clothing that has a strong habit and is elaborate in detail, but he is sensitive to fashion information and he frequently checks on the media and Instagram for future work. My favorite brand these days is [Y PROJECT].

Mr. Kume, who looks good with his characteristic dreadlocks, is studying economics at Doshisha University and wants to do M & A and other jobs in the future. Fashion is mainly used clothing, not particular about the brand, always pursuing his own style. The theme is "Can you dress well even with cheap clothes?" The brand I'm interested in these days is [Children of the discordance].

RAGTAG! Kansai edition" to commemorate the 5th anniversary of RAGTAG UMEDA First of all, Mr. Kento Kume of Doshisha University and Mr. Ren Nakagawa of Vantan Design Institute appeared. The two people who are familiar with second-hand Secondhand Clothing American Village are fashion enthusiasts who both wear second-hand clothing. 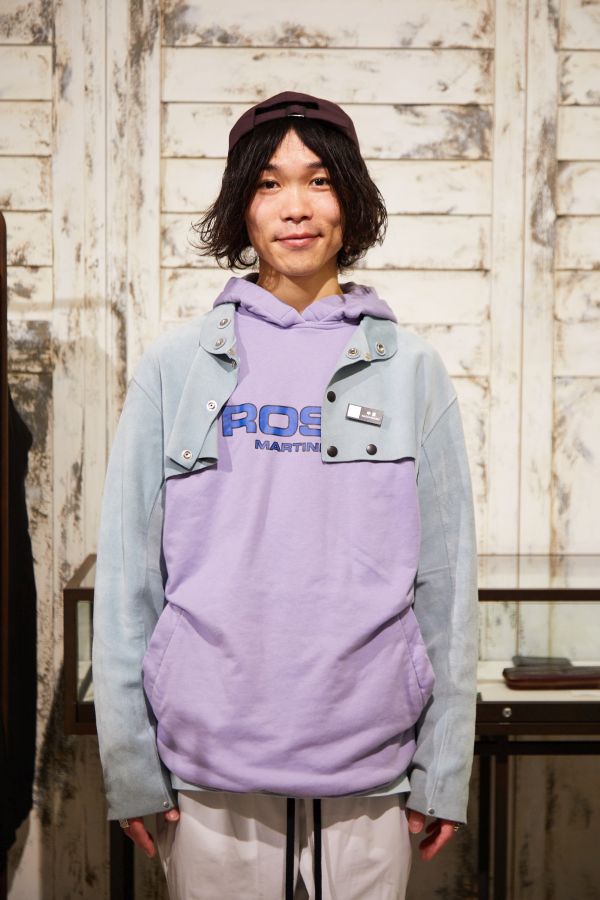 The staff in charge of customer service this time

After graduating from university, he got a job at BEAMS and joined the company in 2017 after working as a cram school teacher. From the beginning, I was assigned to the Umeda store, and I have been a buyer for about half a year. "My characteristic is that the taste of the brand I want to wear keeps changing." 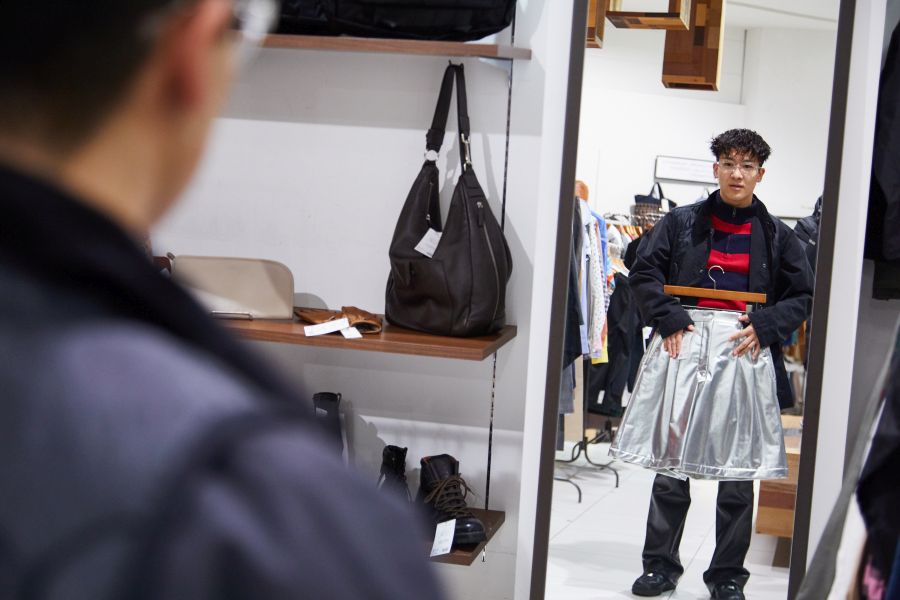 Mr. Nakagawa immediately picked up silver Shorts. You can see the feeling of taking on the challenge. We are discussing what to match with the patterned coat. 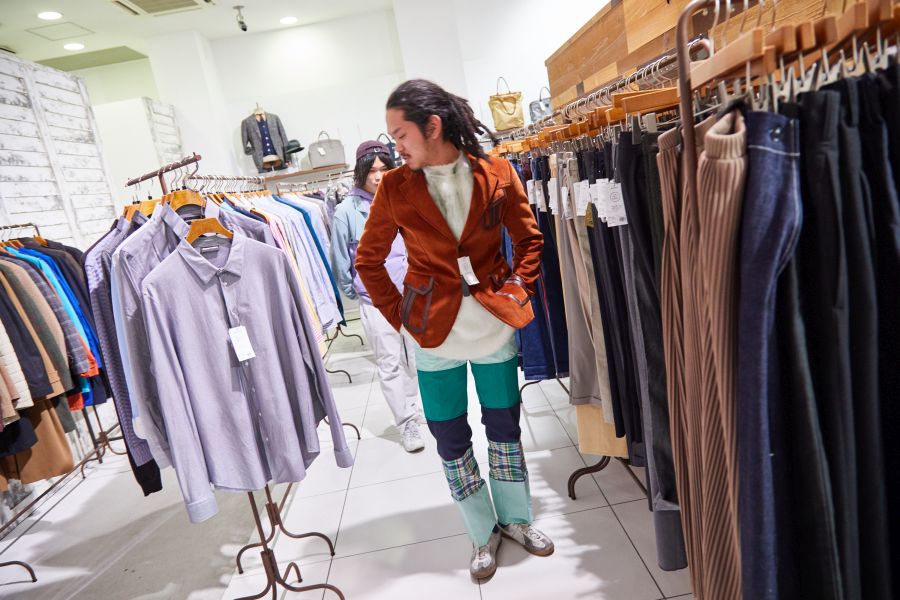 Kume is also trying on unique switching pants. I will wear everything more and more. Mr. Nakagawa listens to the item explanation of the staff NAKAHIGASHI. The stories of fashion-loving boys are endless. 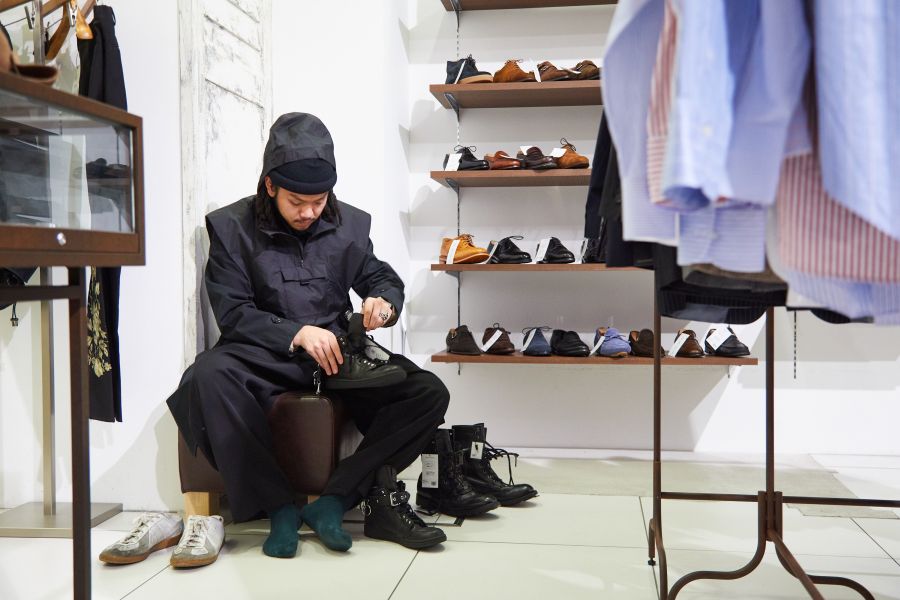 Mr. Kume who looks good in all black style. What kind of coordination will you make?

The two of them intuitively chose their clothes to follow their inspiration, and no matter what they changed into, they were crazy. Both Mr. Kume and Mr. Nakagawa made relatively punchy items into their own style. The style completed one hour later is an advanced outfit that further enhances the individuality of the two. Mr. Nakagawa
"In the beginning, I found this [Gucci] coat (which I wore inside) and layered it. It's hard to buy, so I'm happy and free with advice. I was able to coordinate. "

"Originally, they are fashionable, but what they have in common is a style that has a habit of Osaka. Mr. Nakagawa is attracted to flashy things, but his face is also neat, so the habitual sports mix is also elegantly organized. "

Kume
"I decide what to focus on in the morning mood, but this time I liked the pattern of Gucci's strong pants, so I chose it. It was fun and I mixed street mode among various choices. I was able to be myself. "

"Mr. Kume is a person who has his own character and can create a cohesive style even if he stuffs it. The mesh baseball shirt fits well even though it has a different taste. The hat also goes well with dreadlocks."